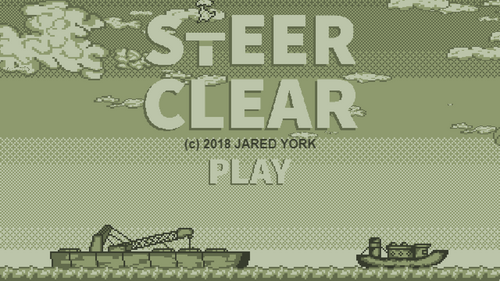 Hello everyone, my name is Jared York and this is the start to a series of devlogs leading up to the release of my game Steer Clear. Steer Clear is a game where players navigate a tugboat and barge through narrow ports and increasingly complex waters. Players can pick-up deliveries in the water and drop them off at specific docks that are requested during pick-up. In exchange for dropping deliveries off at docks, players earn gold which is used essentially as a score.

Another mechanic I want to add is crates. As of now, players can run into crates, but nothing happens and they are destroyed. There are three types of crates: powerup, random, and mine crates. Colliding your tugboat with a power-up crate will roulette through the power-ups in the game and one will be selected after a few seconds. You will be able to see the item roulette part of the HUD at the bottom left of the screen. Power-ups will be anything ranging from "hot coals" (allows you to move faster), to defense shields which will allow you to take an additional hit to either your tugboat or barge without sinking.

Overall, I am extremely excited to see where the remaining development of this game goes. There are a few more features I want to add in order to make the game more fun and desirable to play. I also still have to record some music for the game, which I'm choosing to play some guitar tracks. Normally you probably wouldn't think of guitar being used in a video game soundtrack, but I think it will bring a unique, adventurous vibe to the game. Hopefully within the next several days I can record the soundtrack. In a couple weeks I hope to release the game for PC (via itch.io), iOS, and Android.

Stay tuned for more development logs by bookmarking our itch.io page, liking us on Facebook and following us on Instagram!